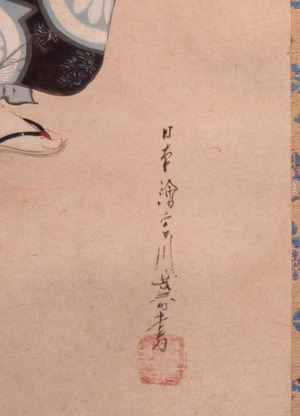 The pre-eminent painter of the first half of the eighteenth century but not better known because neither he or his pupils are known to have designed any prints. His subjects were invariably beautiful girls and women, which makes this painting especially interesting. Shows two new year manzai dancers. These performers would go from house to house in the new year dancing, singing and engaging in knock about routines. The left figure sings and plays a small drum while his companion holds a fan and dances to the beat. Behind, a typical new year pine tree decoration. Full colour on paper, image size 38.25 x 15.25 in; 97 x 38.75 cms. The costumes are exquisitely detailed with outlines in gold. In very good condition with new mount, old lacquer jiku and old box. Signed Nihon-e Miyagawa Choshun hitsu and with blurred seal but reading Choshun no in. Kyoho – Kampo eras. One of the masterpieces of the British Museum’s Ukiyo-e painting collection is a pair of Choshun handscrolls. Status: Sold