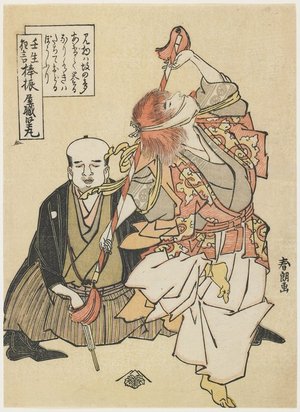 The artist who would later be known as Hokusai first joined the Katsukawa studio around 1778. Like all other pupils of Shunsh�, he assumed a pseudonym (Shunr�) that started with "shun," the first half of his mentor's name. As Shunr�, he initially designed prints of actors in the style of the Katsukawa School. Gradually, he expanded his repertoire to include book illustrations, beauties, and other subjects. In the early 1790s he designed a series of prints inspired by comic pantomimes performed at Mibudera Temple in Kyoto. These prints are some of the earliest to show the young artist's unique style, showcased here in his dynamic rendering of the dancer's brisk movements.