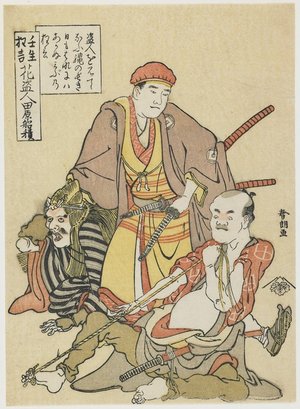 The play "Offering Pails of Water" centers on a love affair between a young beautiful woman and an older married man. They first meet at Mibudera Temple where the woman comes every day to offer a pail of water to the deity of the temple. For this print, Hokusai depicted the moment when the man fell in love with the woman. The man's obvious excitement comically contrasts with the woman's indifference. In 1793, shortly after his teacher's death, Hokusai left the Katsukawa School and joined another studio founded by the painter Tawaraya S�ri. Nevertheless, his association with the Katsukawa School had a profound effect on his development as an artist.