作品名: Fox by the Moonlit Water

The Japanese believe that foxes possess supernatural powers, including the ability to change themselves into human form to beguile unsuspecting victims. They could also create small, magical fires that would lure travelers off the road where they could attack. While this print is typical of Shoson's naturalistic style, the dim light of the crescent moon and windswept water reeds give the print an eerie ambience. Since the marshy plains of Musashino, near Tokyo, have been long associated with moonlit views and clandestine nocturnal meetings, it is likely that this print is meant to suggest that geographic area. 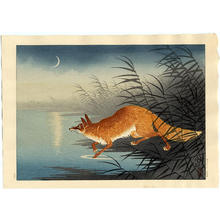