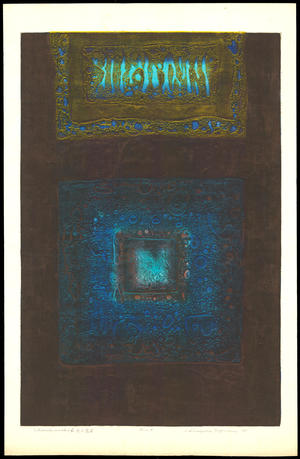 画題等: This large original colour woodblock by Japanese artist Hiroyuki Tajima is pencil signed lower right and dated '70. Edition size at lower center is 50-4 (4th from an edition of 50) and at the left is the title, "Volcanic Rocks B". Tajima Hiroyuki was born in Tokyo Japan in 1911. In 1932 he graduated from Nihon University and in 1943 from the Western-style painting division of the Tokyo School of Fine Arts. Tajima had a great interest in the Western dada and surrealist styles. He received further training on mokuhan from Nagase Yoshi, one of the earliest Sosaku Hanga artists and on fabric dyeing from Hirakawa Matsugoro. The artist made his first print in 1946, the same year he joined the Bijutsu Bunka Kyokai, a group instrumental in bringing abstract and surrealist painting back to Japan after the war. In the 1960s and 1970s Tajima developed his well-known abstract style of prints made of dense rich pigments on complex surfaces formed by building the block up with various materials. His prints were inspired by the ideals of East Asian calligraphy, traditional Japanese painting structures and a sense of space influenced by Zen Buddhist beliefs. In 1963 Tajima became a member of the Nihon Hanga Kyokai, the Japanese Print Association. In 1964 his work was shown in the Tokyo Biennale as well as in international competitions. Tajima also produced landscape prints under the name of Nagai Kiyoshi. He is listed in "Who's Who in Modern Japanese Prints" by Frances Blakemore. He died in 1984. This large print will be shipped flat.