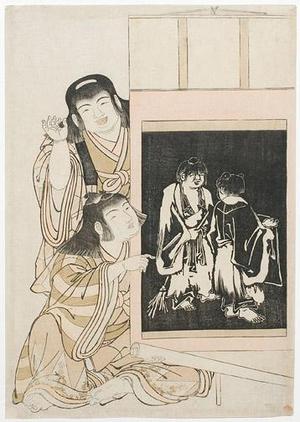 画題等: 18th century Japanese woodblock print of Kanzan (Han-shan) and Jittoku (Shih-te) who are two of the most popular Zen figures. They were two eccentrics who were said to have lived on a mountain in China in the eighth or ninth century. Kanzan resided in a cave and was visited each day by Jittoku, a kitchen helper at one of the big monasteries on the mountain, who brought along table scraps for them to share. Collections of their poetry were highly valued by Zen Buddhists in Japan. In art, the two carefree ragamuffins are typically portrayed laughing uproariously at some Zen joke, not infrequently at the expense of one of the pompous monks in the neighborhood. Neither priests nor laymen, Kanzan and Jittoku symbolize creative, enlightened living, untroubled by petty concerns, and not fettered by social conventions. 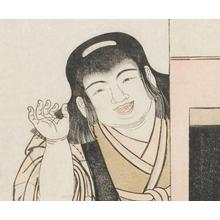 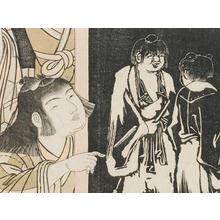 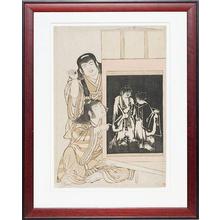