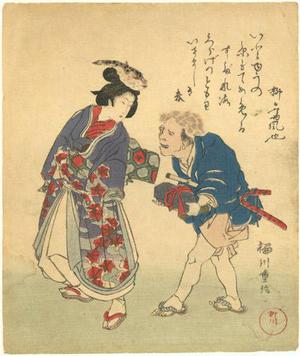 作品名: Couple with Fish on Heads

No existing original. Original surimono were often commissioned by poetry circles and privately published. Surimono represent the peak in Japanese woodblock printing techniques. Their costly production resulted in very limited editions of a handful of impressions of each design only. Most copies of surimono were published at the end of the ninetenth or the beginning of the twentieth-century. The majority of then were based on surimono in the square format that had been published in the city of Edo (modern Tokyo) in the 1810 and 1820s. The ground-breaking publication of Roger Keyes, THE ART OF THE SURIMONO, provided an effective categorization of these surimono copies. This is a Group B copy, probably published for foreigners, printed on sheets of paper which have been cut so that their chain lines -- light, parallel lines in the paper about 3 cm apart -- run horizontally in relation to the design. The paper often has a brown tone, perhaps because of the substance used for sizing it. Group B copies were produced for sale to foreigners and were issued in sets of fifty or more. They were copied from other copies (Group A) which were based on originals. This B Grouping is also indicated by one poem and the signature followed by a seal. 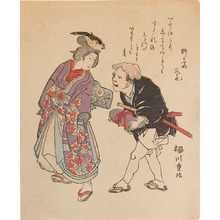 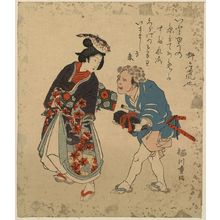 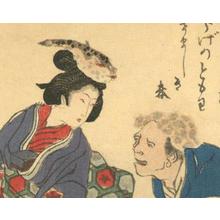 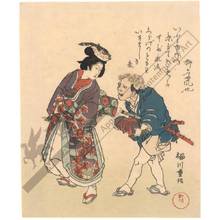 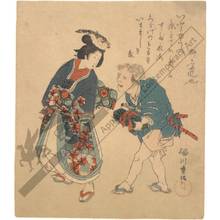 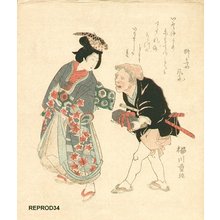 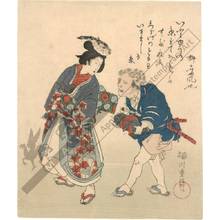 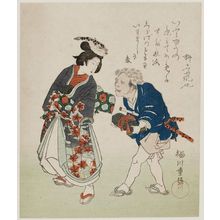