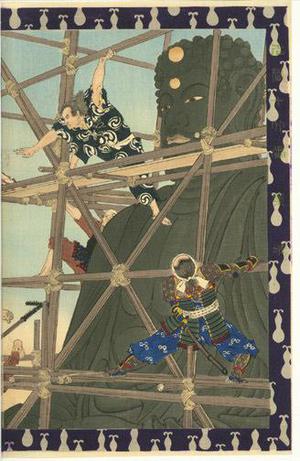 画題等: Kagekiyo , son of Fujiwara Tadakiyo and brother of Tadamitsu. He is celebrated for his strength - one of his noted feats being that in the Yashima battle, in single combat he tore off the neck covering (shikoro)of the armour of Minamoto Miyo no Yashiro Kunitoshi. He owed his name Akushibiyoe (miscreant Shibiyoe) to the murder of his uncle, the priest Dainichibo, in whose temple he had sought refuge, but whom he believed to be a creature of Yoritomo. His father and brother were killed by order of the later, and the popular legend has it that his attempt to murder Yoritomo in the Daibutsu temple of Nara (Todaiji) had been thwarted by Hatakeyama Shigetada. Afterwards, he blinded himself rather than see the triumph of his enemy; since then he has been the patron of the blind. 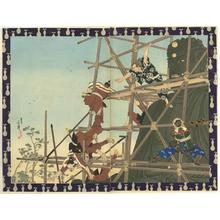 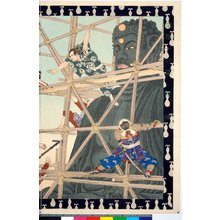