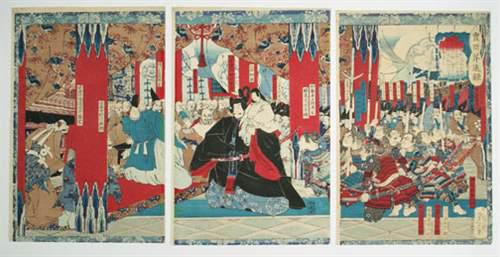 作品名: The Advancement of Toyotomi Hideyoshi

A triptych of a highly detailed historic scene depicting the great unifier of Japan, Toyotomi Hideyoshi, in the 16th century. Toyotomi Hideyoshi is considered the great unifier of Japan, and his rise to power was one of the most striking examples of upward social mobility in premodern Japanese history. He was born into a peasant family and by intelligence and intuitive understanding of military strategy, became the most powerful man in Japan. According to Roger Keyes: This triptyche is one of 3 in a set entitled "Toyotomi Shoshinroku" (A Record of Advancement of Toyotomi Hideyoshi) done in about 1869. Hideyoshi is pictured here during a ceremony at Daitokuji Temple held for the advancement of Prince Samboshi. The set of three triptyches were published by Manya Sonbei; engraved by Takarada Toshimatsu. After the death of Oda Nobunaga, Hideyoshi supported the three year-old grandson Samboshi to become head of the Oda clan in the struggle for power. The triptyche is in very good condition, except for minor toning and fading. It is difficult to see but Hideyoshi's black ceremonial robe is done in urushi-e technique where a black design is printed onto a black ground and burnished to simulate a jacquard silk. 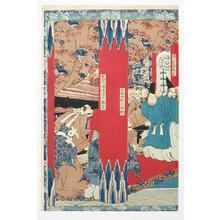 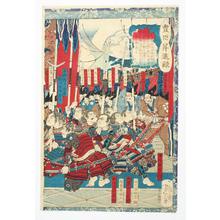 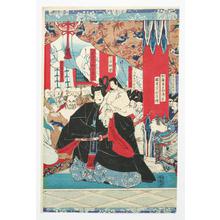