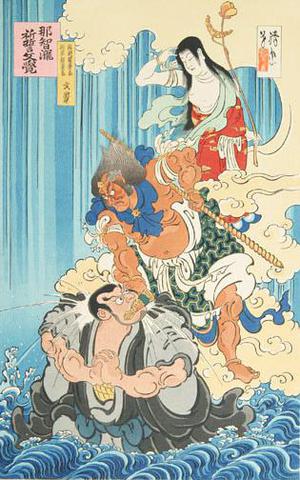 The tragedy of Kesa Gozen is a tale of passion and remorse. Kesa Gozen was the loyal wife of a palace guard. She was a paragon of virtue and beauty. Endo Morito, a young samurai and her cousin, he fell in love with her beauty. She turned away his persistent advances. Eventually this became too much and she decided to make an end to matters. She agreed to his demands on one condition, that he kill her husband. She told him where he slept and planned with him the murder. Instead of her husband she cut her hair and lei in the bed where he was supposed to be. When Endo Morito realized that he had cut off the head of Kesa instead he became a monk and served penance under the icy Nachi waterfall. During this penance he was strengthened by Fudoo Myoo (the immovable)and his two acolytes Seitaka and Kongara. On becoming a monk he took the name Mongaku Shonin.(Robinson Kuniyoshi P.26) Wonderfully detailed print with vibrant design and color and gauffrage embossing probably by Torii Kotondo in the style of his father Torii Kiyotada whose name he adopted in 1954 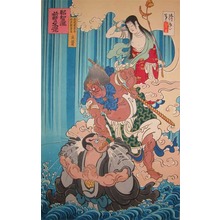 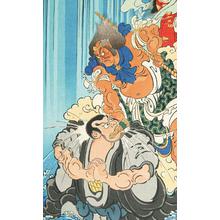 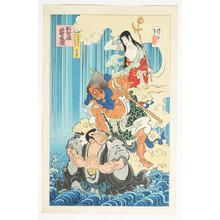