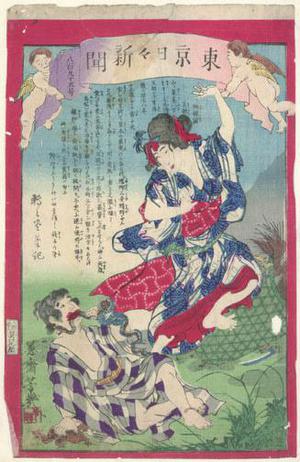 A newspaper article # 895 In 1874, just a few years after the birth of the modern newspaper industry in Japan, Ukiyoe printmakers [ezousiya] published nishikie shinbun, a variety of broadsides which combined traditional color wood-block-prints [Nishikie] and short news articles [shinbun]. A group of illustrators and writers from the Tokyo Nichi Nichi Shinbun, which is the first daily newspaper published in Tokyo, joined forces to publish the first nishikie shinbun titled "Tokyo Nichi Nichi Shinbun" in 1874. They usually based the nishikie shinbun on articles taken directly from newspapers that were published anywhere from two days to two months earlier.Nishikie shinbun picked up news including murders, burglaries, fires, double suicides, and strange true stories. In them, common people like carpenters, drivers of jinrikisha (rickshaw) , female servants, weavers, craftpersons, farmers, policemen and sometimes foreigners, are illustrated as full length portraits with their own names. Around or above the figures, is a text of 200 to 600 characters explaining the details. Tsuchiya Reiko, A COLLECTION OF ILLUSTRATED UKIYOE NEWSPAPERS AS NEWS MEDIA IN EARLY MEIJI JAPAN. www.nishikie.com for detailed information on news prints. 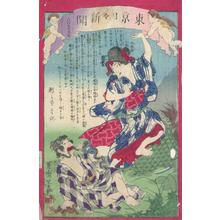 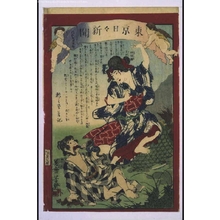