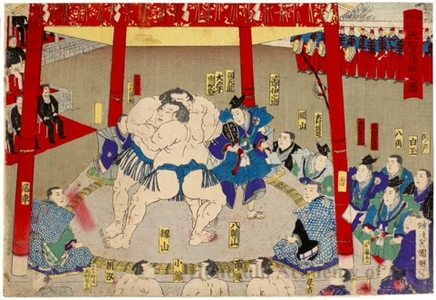 作品名: Sumö Match Held in the Presence of The Emperor and Empress at Yayoi Shrine

This print depicts an important sumö match held by the Meiji emperor in 1885, and attended by many aristocrats and statesmen. In the Meiji period (1868-1912), sumö became a political issue. During the early Meiji period, Japan wanted to catch up with the West and become a world leader. The ruling parties of Japan feared that sumö wrestlers with their loincloths and topknots conveyed an uncivilized image of Japan. However, many Japanese questioned wholesale Westernization and remained loyal to their cultural traditions. The Meiji emperor’s sponsorship of the match depicted in this print helped re-establish the status of sumö. (from Oh Sumo! exhibition 5/7/07-)