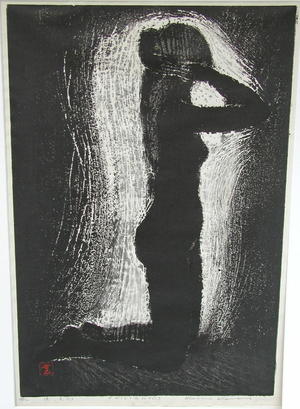 Thank you for your fast response. I can expand further on what I wrote yesterday, re Twilight and Kwannon. I showed your message and consulted with my wife this morning over breakfast. Her memory of the circumstances surrounding the purchase of the Kawano’s served to jog mine, and we are in agreement. They both were purchased in 1962, at the Tachi East BX (which indeed was an old hangar). The concessionaire was Mrs Conrad, an interesting person. She was White Russian by birth. Her family fled to China somewhere along the line (one of the northern port cities where there was a good sized Russian population, I think), and she went to Japan when the Communists took over China. She was somewhat older than either of us, around 45-50 at that time. She had a successful gallery in Tokyo besides, and she had a working relationship with many of the major artists. One time she took us to Kiyoshi Saito’s home/studio, where we purchased his “Notre Dame” (we have a few other Saito’s: I’ll get to that a little later on. Re “Twilight”: It is, indeed, Twilight (C). We had a choice of three prints when it came out, including #2 (which I remember as being darker). There were subtle differences in the shading of each; we chose #12 because we liked it the best, with the shading being the determinant. The current “wisdom” at the time was that “the lower the number, the more valuable the print”, which may or may not be so. I am attaching a photo of same, which I took for insurance purposes some time ago, also one of the label attached to the back, and, as your requested, close-ups of the inscriptions on the lower margin. (when I checked the number first, the 2 looked like a 3; my child bride, who never errs, just examined the print and informs me that the number is indeed 12, not 13. Mea culpa!) Re “Kwannon”: We first saw this in 1962, when Mrs Conrad had a copy available. Being short on $$, a chronic condition at the time, we hemmed and hawed and, when we made the decision to buy, the print was gone. Since we had a good relationship with Mrs Conrad, she had to keep after Kawano to get him make (strike?? new word for me) a copy, and this took a good bit of time... a matter of months. Thanks again!! 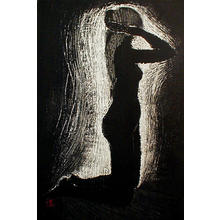