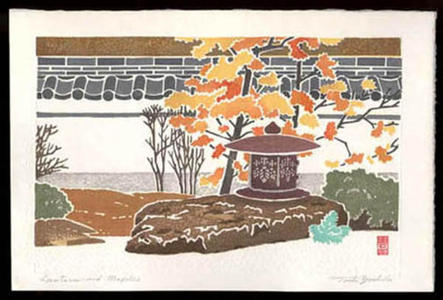 Offered for sale is a wonderful, pencil signed (and thus lifetime impression), woodblock by Toshi Yoshida (1911-1995), titled Lanterns and Maples. It depicts a garden in Mitake and according to the Yoshida Hanga catalogue, the blocks were self-cut by Toshi himself. In the left margin, embossed in Japanese is the date 1963. It is from Toshi Yoshida's "white-line" garden print series, in which Toshi used a white outline rather than the traditional black outline. According to Eugene M. Skibbe in his seminal book Yoshida Toshi: Nature, Art and Peace, in this series of prints Toshi incorporated ideas from his earlier abstract oil painting and prints into otherwise traditional material. Toshi Yoshida is the eldest son of Hiroshi Yoshida, one of the preeminent shin hanga school masters, and in the last few years since his death, has finally been achieving the recognition that bypassed him during his lifetime. This print is in pristine condition, with intense colors, and nice embossing in the white foreground. It is from a private collection, and has never been framed. The image measures approximately 8 x 12 ? inches, plus full margins. Because it is difficult to see the embossed date in the margin, it is not included in the detail scans. 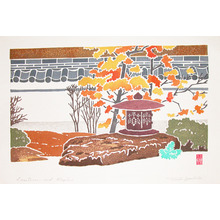 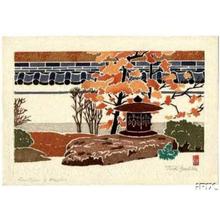 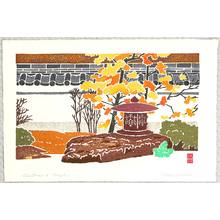 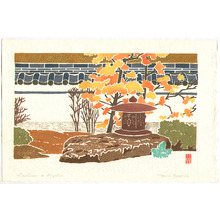